January 13, 2017
#BestNine has been trending on social media the past week few weeks. I did one but decided that I needed a blog post dedicated to it. 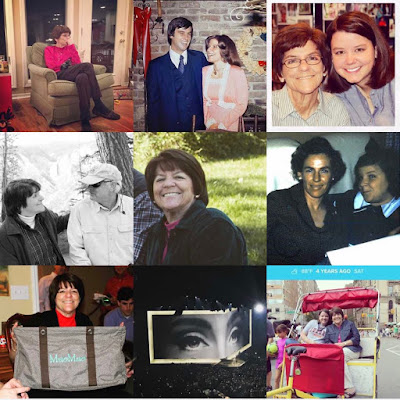 Not sure if you noticed a recurring theme (spoiler alert: it's my mom). 2016 was my first full calendar year without her (January 1st - December 31st). In 2015 I had her for almost 3 months. I spent the remaining 9 months wandering. Wandering in sorrow, depression, hopelessness, among other things. I remember how I felt January 1st of 2016. I vividly remember taking a deep breath and taking my first step toward a full calendar year without her.

2016 brought about a lot of changes. Most notably my move to Nashville. A move that I still stand firmly by today. This city has given me a lot of insight into who I am. It has also given me insight into the world. I've met some interesting people. I've watched and learned from these people. I've learned from my own experiences, too. I strongly believe that when I look back on this move 50 years from now, I'll be grateful I did it.

My mom was at the center of my 2016 #BestNine. She'll always be at my center. She will always be what grounds me. While I spent 2016 discovering who I am, I will spend 2017 making decisions. That sounds like an "all work, no play" kind of plan, but it's not. Not in the least. I've been able to float a bit this past year. I consider floating to be like rolling with the punches. Something I will continue to do, but the decision making will come into play. I need to decide what I'm going to do. What do I want? How can I actually help others? Where can my gifts be used to benefit others? The community? The world? All big decisions that will not be decided in a week, but WILL be decided in 2017. Also, at my center, I need more Jesus. I have not been actively ignoring Him. I still believe I have a relationship with Him. However, I have not been feeding it. I have not been nourishing it. That needs to be a priority.

2016 felt like a recovery year. A lot of things happened in years past, and I needed to mend. I needed to move forward in a way that I could heal. I'm not 100%. Or maybe I'm just a different 100%. I have good days and bad days (like everyone does), but life does look a lot different. In a good (sometimes challenging) way. 2017 is going to be a decision year. It's going to be challenging, but I'm going to make it fun.

So moving on to 2017. A little more Jesus, a lot less me, and some decisions.

*Shoutout to Adele for making my #BestNine. Your concert was magical!

Popular posts from this blog

Been a while. I just realized that my last update was in June 2017. Can't even begin to tell you all that's happened since then. I've got about 8 posts that I started, all about different things, that I never finished. The way my life was going, the writing was not something that was inspiring at the time. It felt like a chore. Like I was doing it for everyone else and not for me. Writing is an outlet for me. If it doesn't serve as an outlet, I don't want to do it. Somewhere along the way, I started to keep things inside (spoiler alert: that made things worse). So, here I am, trying to make things better, for me.

This season without my mom (that will last for the rest of my life) has been an overwhelming one to say the least. It's been 4 years, but I believe when certain life-changing things happen to you time is something you can lose track of. To help with that I just write things down. Whether in a list form or paragraph form, just write it. Someti…
Post a Comment
Read more

"What are you doing these days?"

June 22, 2017
I've been dodging a lot of questions about the current state I am in (it's Tennessee in case you forgot). But seriously. I could honestly keep dodging. It's my business. My life. However, I've always pretty much been an open book. I also feel like if you are comfortable sharing your good circumstances, maybe sharing your not so good circumstances could help someone else.

Social media masks one's life. Everyone looks like they're living their best life, and I suppose they actually could be. But I think we can confuse "best" with "perfect". Nothing is perfect. And that's okay.

The past year has been an interesting one. I haven't had a super steady job since I left Birmingham. I've really been trying to figure out what I want to do. What I enjoy doing. Turns out travel is at the top of my list, but all I can do with that right now is spend money, not make any. I don't think life is all about making money, but it …
Post a Comment
Read more

May 31, 2015
I learned pretty early in the life that no one lives forever. And just because you learn it early, it doesn't make it any easier when you're reminded of it.

I miss her on Sundays the most. I don't know if it's because that's the day she died, or if it's because we always talked on Sunday. Maybe a little of both. More often than not, I'm off on Sundays (excluding flag football season). It was always our day to catch up. The last few months of her life, I'd call her as I was leaving church. She'd always answer. I miss that. I miss it every Sunday. I guess I really miss it everyday.
This was posted a year ago...

And this was posted 2 years ago...

Social media really can be a great comfort. I know there are people in the world that don't use it for good, but I'm so glad I have it. The Timehop app is a blessing and a curse. It reminded me about the 2 pictures above. Nice to know that a year ago I was sitting in the den with my mom. She was doing well…
Post a Comment
Read more